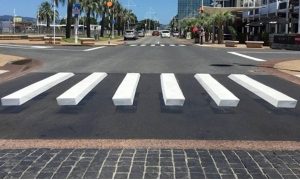 3D zebra crossings are a relatively new concept with several towns around the world introducing this new and exciting line marking technique, from Iceland to India, Taiwan to New Zealand.

The idea for these markings came about as an imaginative solution to stop cars and let pedestrians cross the road without the aid of traffic lights, as well as slowing motorists down without the aid of speed bumps, as he or she perceives obstacles are blocking the road ahead. The anamorphic markings are designed to look like a 3D floating zebra crossing, which is achieved through marking out rectangular volumes drawn in perspective and adding bright and bold colours in some cases to make the markings stand out even more.

The design makes the markings look as though they are hovering when viewed from ground level, which has an impact on approaching drivers, but when looked at from above they appear as columns, creating a unique experience for pedestrians too as if they are walking on air.

Despite the overall response to these markings being a positive one, concerns have been raised surrounding the actual safety of these crossings, with many suggesting that they pose a risk to vehicles breaking suddenly.

However, companies and councils who have introduced these markings have stated that they do not lead to sudden braking risks as when you actually reach the markings they appear as mild slanting strips with micro 3D effects. In other words the illusion can only be achieved from a certain perspective, so as drivers move towards the markings this certain perspective only exists for a few seconds.

In New Zealand’s Tauranga they have used Geveko’s PREMARK (pictured) to mark the 3D zebra crossing. The reaction has been positive to the markings and there has been a decrease in speed from traffic upon approach.

A trial 3D crossing was installed in London in 2019 for 12 months to test the reaction of drivers and pedestrians. Other countries have targeted crossings around achool areas to increase safety, especially during peak times.

“There’s no doubt that new, innovative ideas are needed to ensure drivers stay aware while on the roads. It would be great to see more of these crossings in the UK so we could really see the impact they could have if rolled out nationally.” Debbie Mann, Director