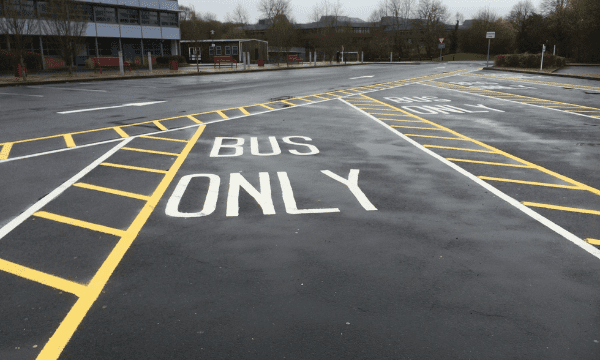 How can line markings help public transport to run efficiently?

We all know how frustrating it can be when public transport is not running efficiently, which is why it is vital that train stations, tube stations and bus stations have procedures in place to ensure they are running as efficiently as possible.

With concerns surrounding global warming increasing, the increasing prices of fuel, the congestion charge in cities such as London and now the T-charge, commuters are now relying on public transport more than ever.

Although many people wouldn’t think it, line markings do play a vital role in helping public transport run efficiently, whilst safeguarding the general public using the services.

The first and most obvious use of line markings for public transport is to mark out the different platforms and to also indicate where members of the public should stand when waiting for transport to arrive. For example, the yellow line that you will typically see on railway and tube station platforms is to indicate to the public where they should stand, to stay a safe distance away from the platform, safeguarding them.

Another way in which line markings can be used to safeguard the public whilst using public transport is through marking out No Entry hatched areas. These markings help to prevent the public from entering and standing in areas that are not safe. Finally, pedestrian walkways also help with safeguarding, helping to guide people safely whilst they navigate their way to and from public transport.

Line markings can also be used in the car park of a public transport station. For example, The car park at a train station needs to be able to cater to a large volume of people and needs to be effective at directing drivers during the rush hour periods. Line markings can be used to achieve both of the above and they can also be used to ensure the car park caters to all users - disabled parking bays, electric car charging spaces, motorcycle parking and areas where people can lock up their push bikes.

Public transport and electric cars are both alternatives that could help ease the pressures being put on fossil fuels and the environment.

Electric cars have increased in popularity in the UK over recent years, with there being over 100,000 plug in vehicles currently on the road. This spike in popularity is excellent to see, however it does mean that more businesses should be considering contributing to the re-charging network by having electric car parking and charging facilities readily available for their customers.

We have marked out electric car parking facilities for a number of our clients, so if you are interested in facilitating this in your car park, get in touch.