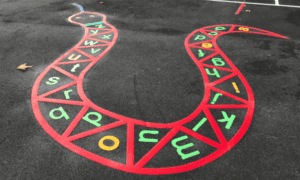 What are the different Types of Thermoplastic Paint? 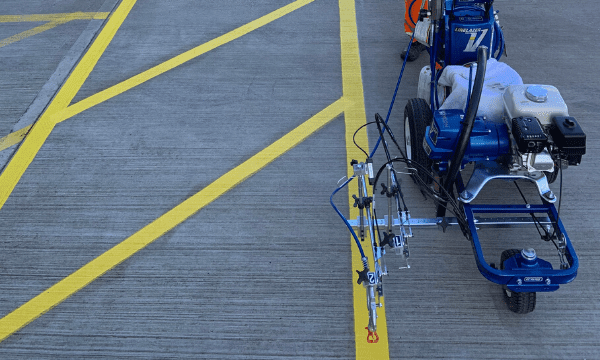 Hot thermoplastic comes in powder form in yellow or white. It gets heated to around 200c and is used in our Graco Thermolazer pram or our hot melt trailer pots. We use Geveko hot thermoplastic for line marking car parks, lorry bays, tracks on playgrounds and outdoor sports markings on tarmac. This can be used on concrete surfaces as long as a primer is used to act as an adhesive to ensure a long life span. Hot thermoplastic is the most widely used product on the roads and car parks as it has great durability and can be made to be reflective for night drivers.

Pre-formed thermoplastic are the ready-made numbers, letters and designs that are laid on the ground and heated using a propane torch to melt them to the surface. We use Geveko or Thermark pre-formed thermoplastic for playground markings and some health & safety markings such as speed roundels and lettering that needs to be of a certain size that can’t be laid in hot thermoplastic or MMA.

Cold thermoplastic (MMA – methyl methacrylate) has peroxide added to it to ensure it sets. We use Geveko’s Plastiroute or Meon’s Ultraline with a draw box for car park markings, surface coatings, wording, directional arrows and designs. This product comes in a wide variety of colours and is probably the most versatile product on the market lasting in some cases up to 20 years.

Our new Graco linelazer uses Meon’s sprayable Ultrastripe (MMA) paint that has a reactive & reflective bead dropped on to it by the specialist machine that starts a reaction to make the paints set solid. This can be used on roads, car parks and any other areas that require long lasting high visibility markings that are more eco friendly than conventional thermoplastics. The benefit of using MMA is that you don’t need a hot works permit and can be used at airports, petrol stations, ship yards as well as anywhere else that cannot have hot works.

When it comes to deciding which is the best for the job it depends on the surface to be marked and the budget! Hot thermoplastic is often used on tarmac while it is better to use MMA on concrete and is much longer lasting. We will advise you on the best material for the job to ensure you have the most effective and long lasting finish.